Major changes in the transport operation during the ‘Parade on the occasion of Polish Army Holiday in Katowice’. 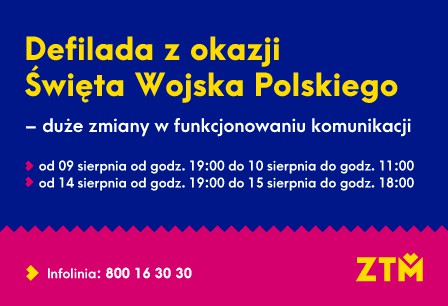 The Polish Army Holiday will be already on 15 August. This year celebrations are exceptional for our region, because just in Katowice, in the area of the Upper Silesian-Zagłębie Metropolis, the main celebrations will be organised, initiated on the central level. That means closing for traffic streets in the Metropolis capital and major changes in the operation of transport, organised by the Metropolitan Transport Authority (ZTM). Passengers must take into account changes already from the Friday evening (i.e. from 7 p.m. on 9 August)

The annual great event was moved this year from Warsaw to Katowice. The decision was made on the occasion of continuing over time inauguration of the celebration of the Silesian Uprising centenary. Because of that in the area of the Upper Silesian-Zagłębie Metropolis on 15 August and on the day preceding the final rehearsal, in the periods specified below, changes will be introduced in the tram and bus transport in Katowice.

The final rehearsal will be started on Friday evening and will continue till the Saturday morning - from 7 p.m. on 9 August to 11 a.m. on 10 August. Whereas the main celebration, i.e. ‘Parade on the occasion of Polish Army Holiday’, will take place on the next Thursday, but it will cause changes already on Wednesday - from 7 p.m. on Wednesday 14 August to 6 p.m. on Thursday, 15 August.

IMPORTANT! The event will require total closing for traffic of Aleja Korfantego, and streets: Chorzowska, Jagiellońska, Bagienna, Rondo gen. Jerzego Ziętka, as well as the tunnel under the Katowice roundabout.

On the section: Chorzów Rynek – Katowice Plac Wolności in the above times a substitute bus transport will be started, marked with number T-6. Buses of this line will be running with frequency of approx. 10 minutes. Detailed description of the route is provided in the message.